Walking along the paths mentioned above you can see many species of grasses, shrubs and trees premises. Among the herbaceous-shrubby we can remember the wild asparagus, broom, wild chicory, horsetail…
As with regard to tree species have different species of oak (oak, oak, oak), holm oak, ash, maple, strawberry …
If you are interested, while walking along the suggested paths, you will have the chance to notice local erbaceous, shrub and tree species.
Take notice of some of them below. 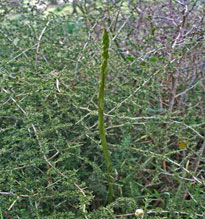 Asparagus acutifolius L.
Wild asparagus is a plant of the Liliacee family which grows in all the Mediterranean area. Locally is known as “asparago spinoso” (thorny asparagus) and “asparago pungente” (asparagus that stings) due to the thorns at the base of the foliage. It is a herbaceous plant highly branched that can reach 2 meters in height. In Spring from the rhizome (subterranean stem modified) grows up the shoots which, if not harvested, will become stems. Wild asparagus can be easily found in woods and especially a the base of olive trees’ trunks. You can enjoy harvesting and, then, cooking them for example in a risotto or as the main ingredient of an omelette.

Hyoseris radiata L.
The Hyoseris radiata, commonly known as wild radicchio (“chicory”), is a plant of the Asteracee family. The name of the genre comes from the Greek “hyo”, pig, and “seris”, a chicory similar to our lettuce, so, literally, “pig lettuce”.
Anyway our common names are trinciatella and wild radicchio.
It is a Mediterranean plant, easily found in uncultivated fields, on roadsides and even between the stones of the dry stone walls.
The plant has diuretic and refreshing properties and is largely used for cooking.
Usually we harvest the leaves at the base which are, then, boiled and used to make pies and tortelli, lightly fried in a pan or simply drizzled with olive oil and lemon. 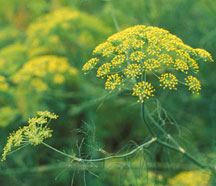 Foeniculum vulgare Mill.
Foeniculum vulgare o wild fennel is a Mediterranean herbaceus plant of the Umbelliferae family.
It is a wild perennial plant with a branched stem that can reach 2 meters in height. Its green leaves look like those of the hay and in summer they sprout umbels of little yellow flowers. Then fruits or achenes green at first, then gray. Of wild fennel are used shoots, leaves, flowers and fruits which are wrongly called seeds.
The harvest of wild fennel is when the flowers are open, usually from mid-August to September. Flowers can be used fresh or dried.
Since ancient times fennel has been known for its healing and culinary properties. It owns especially diuretic, antispasmodic and anti-inflammatory properties. It is also used for digestive difficulties and during breastfeeding to reduce air colics in children.
It is known that a herbal tea made with seed of fennel it is very useful for abdominal bloating and aerophagia. In cooking it is usually used to flavour dishes. Flowers are used to flavour boiled chestnuts, baked mushrooms, olives in brine and pork. Seeds are used to flavour taralli (a specialty of Puglia. It is like a breadstick made as a ring) and to spice wine and confectionery. 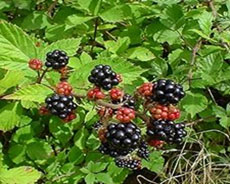 Rubus ulmifolius Schott.
Rubus ulmifolius Schott or wild bramble is a plant of the Rosaceae family. It has a vigorous and intrusive upright that mekes it like a thorny, tangled and impenetrable mass. It is widespread and it can be found in woods and on roadsides.
Its fruits, the blackberries, are well known and appreciated. Their harvest is in August and you can eat them fresh or use them to make jams. 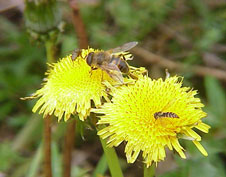 Taraxacum officinale, Weber
Taraxacum officinalis, known as dandelion, is a plant of the Asteracee family. It is know even with the name of piscialletto (literally “pee in bed”) because it used to be said to children that who picked it will have peed in bed during the night.
Botanically the dandelion is a herbaceous perennial plant, high from 3 to 9 centimeters. It has a large taproot, from which develops, at ground level, a basal rosette of leaves.
Flowering occurs mainly in spring, so you can see these nice little yellow flowers sprout among the grass in the fields.
From each flower then develops an achene, a dry indehiscent fruit provided with the charatcteristic pappus (the white light and feathery appendix).
The leaves of dandelion can be used in kitchen to prepare fresh salads or you can boil the leaves and use them for pies. 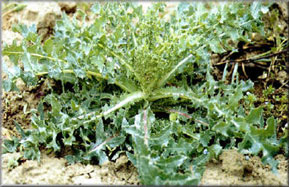 Sonchus oleraceus L.
Sonchus oleraceus L. is commonly known as “cicerbita”,sow thistle, is a herbaceous plant of the Asteracee family.
The inflorescences are yellow and the fruits are achenes with pappus. They are very common in our area and in Spring you an see people in the fields picking up sow thistles’ leaves to use them in kitchen, mainly boiled and, then, seared in a pan.

If you want to deepen you knowledge of the local herbaceous, shrub and tree species we suggest you to visit the Chianti botanical park which is located on the road that from San Donato leads towards Castellina in Chianti, just past the winery Casa Emma.
Link http://www.parcobotanico.it
Inside the botanical garden of Chianti and ‘situated also an astronomical observatory of which we give some information below.
Polyfunctional Observatory of Chianti. (http://www.osservatoriodelchianti.it)

The Plyfuncional Observatory of Chianti is located in Montecorboli; it owns the greatest telescope in Tuscany but the observatory is not only astronomical but even meteorological, seismic and environmental.
The main users are scholars and university researchers (from the University of Florence and Siena above all) but the Observatory provides services that can be used by farms and environmental workers and hosts educational and promotional activities involving primary and secondary schools, amateur astronomers, citizens and tourists passionate and interested in environmental subjects and, in particular, to the knowledge of the sky.

How to reach the Observatory:From the highway Siena-Firenze take the exit “San Donato” and go along following the direction towards Castellina. Past the village of San Donato and, just after few kilometers, the farm “Casa Emma” you will find the car park next to the road (Strada Provinciale 101).
Due to logistic reasons and to avoid the excessive approach of the cars to the observatory, the access must be on foot along a path (300 meters from the car park) inside the Botanical Park.